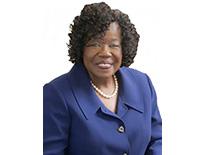 Over the past four years, JMA has experienced rapid growth, doubling the size of its full-time workforce and increasing sales revenues by 120%. What started as a one-woman consultancy in 2005 now employs over 170 full time staff and 27 subcontractors, and JMA is the prime contractor on over 20 Federal contracts.

JMA’s success has led to broad recognition within the industry. In 2016, JMA was named one of the fastest growing private companies in America by INC 500 and is among Black Enterprise’s 100 fastest growing Black-Owned businesses. The Washington Post named JMA Solutions among the Top Workplaces of 2016 and Ms. Adams was featured in Forbes Magazine (August 2016) and the Washington Business Journal (December 2016). Ms. Adams was a recipient of the 2017 Minority Business Leaders award.

Ms. Adams founded JMA following a distinguished 24-year career in the United States Air Force where she served as the Information Management Career Field Manager for the Air Force Communications Agency. She was responsible for providing leadership and training to over 900 enlisted Information Managers and over 1000 civilian administrative personnel. Ms. Adams received numerous medals and awards while serving in the Armed Forces.

Ms. Adams’ has also included philanthropy among her company’s core values and currently donates approximately 5% of JMA’s annual profit to charity. She serves as an active DC Chamber of Commerce board member and is a contributor on several local organizations, charities and associations.