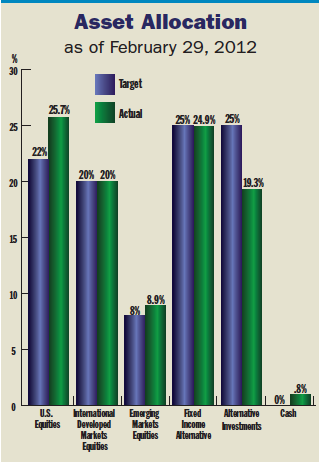 At the end of Fiscal Year 2011 (“FY 2011”), the combined assets of the Police Officers’, Firefighters’ and the Teachers’ retirement funds (“the Fund”) were valued at $4.5 billion, which is an increase of approximately $200 million after the payment of all member benefits and administrative expenses. During FY 2011, the Fund generated a gross return of 2.9%, outperforming the Total Portfolio Benchmark by 0.8%. The outperformance was driven by the Fund’s Absolute Return and Private Equity investments. Since its inception in October 1982, the Fund has outperformed the 7.0% actuarial return target by 1.9% every year, before the deduction of management fees.

Following the U.S. Federal Reserve’s announcement of a second round of quantitative easing (QE2) in August 2010, the global capital markets experienced mixed results towards the end of 2010. While equity markets saw gains and the U.S. market outperformed its developed markets peers, bond markets gained less. Investors were uncertain due to several major geopolitical events during early 2011, including the political crises in the Middle East, a catastrophic natural disaster in Japan, and the continuing debt crisis in the Euro zone. However, asset prices were only minimally impacted during the high market volatility. During the fourth quarter of FY 2011, political gridlock over the debt ceiling in Washington, D.C., prompted investors to shift from risky assets to perceived safe-havens (e.g. the Swiss Franc and gold). In August 2011, the first-ever U.S. sovereign credit downgrade, continued unemployment, and weak growth figures caused more negativity for the market.

In February 2011, the Board modified the strategic asset allocation targets to further diversify the portfolio and to improve the portfolio’s downside protection. In addition, the Board approved a new manager structure, shifting a significant portion of the Fund’s assets from active to passive investment strategies to minimize investment risk and expenses. The current targets and actual asset allocations are shown in the graph on this page.

During FY 2012, the Board will conduct searches for dedicated emerging market debt, foreign bond, and high-yield bond managers. This will move the Fund’s actual allocation closer in line with the new targets.

The primary task for FY 2012 is the completion of the asset allocation changes approved in 2011, including the restructuring of the fixed income portfolio. This is expected to further diversify the portfolio by adding dedicated investments in international developed markets bonds, emerging markets bonds, and high-yield bonds. In addition, the Board will develop investment policies and guidelines for the Absolute Return and Private Equity programs.