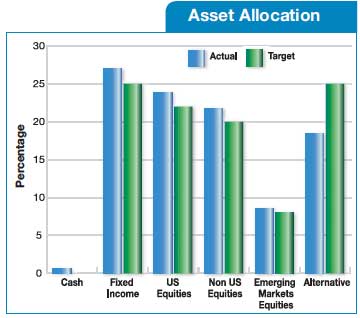 At the end of Fiscal Year 2012 (“FY 2012”), the combined assets of the Police Officers’, Firefighters’ and the Teachers’ retirement funds (“the Fund”) were valued at $5.2 billion, a net increase of approximately $700 million after the payment ofall member benefits and administrative expenses. During FY 2012, the Fund generated a gross return of 14.5%, outperforming the Policy Benchmark by 0.5%. Since its inception in October 1982, the Fund has underperformed the Policy Benchmark, but exceeded the actuarial return target of 6.5%, returning an annualized 9.1% for the 30 years since its inception.

During fiscal year 2012, global markets experienced massive swings in investor sentiment and unusually high levels of market volatility. After a dramatic sell-off during the third quarter of 2011, equity markets posted very strong results in the final quarter of 2011 and the first quarter of 2012. Most major markets experienced double-digit returns over this six-month period. The forceful actions of the European Central Bank (ECB), which lowered interest rates in late 2011 and initiated two rounds of its Long Term Refinancing Operation (LTRO) in early 2012, apparently reversed investors’ prior pessimism about the lack of economic growth across the globe and the continued financial crisis in Europe.

This six-month period recovery was followed by another setback in the second quarter of 2012, when investors once again turned pessimistic on the political and economic viability of the Eurozone. In addition, growing concerns around the condition of banks in Spain weighed heavily on markets.

The third quarter of 2012 brought much needed relief thanks to global central bankers. With economic growth stalling, the ECB and Federal Reserve Bank (Fed) intervened aggressively during the quarter, announcing a policy of unlimited government bond purchases (ECB) and monthly targets for mortgage security purchases (Fed). The response of policy makers highlighted a widespread concern that the global economy had gotten weaker.

In terms of market performance during FY 2012, the Russell 3000 Index, an index measuring the performance of the 3,000 largest U.S. companies based on total market capitalization and representing approximately 98% of the investable U.S. equity market, increased 30.2%. Non-U.S. equity markets, as measured by the MSCI All Country World ex U.S. Index, rose 13.8%, partially aided by the appreciation of non-U.S. currencies vs. the U.S. dollar. Emerging markets, as measured by the MSCI Emerging Markets Index, once again outperformed developed markets, generating a positive return of 16.9%. The Barclays Capital U.S. Universal Bond Index, a broad measure of U.S. fixed income markets, appreciated 6.4%, driven by a continued decline in Treasury yields.

In February 2011, the Board modified the strategic asset allocation targets to further diversify the portfolio and to improve the portfolio’s downside protection. In addition, the Board approved a new manager structure, shifting a significant portion of the Fund’s assets from active to passive investment strategies in order to minimize investment risk and expenses. The current targets and actual asset allocations are shown in the graph on this page. During FY 2013, the Board will conduct searches for dedicated emerging market debt, foreign bond, and high-yield bond managers. This will move the Fund’s actual allocation closer in line with the new targets.

In the spring of 2012, the Board also engaged Cliffwater LLC as its alternative investments consultant. Cliffwater worked with the Board to establish a private equity and absolute return investment policy and guidelines for the implementation of the programs. The Board expects to gradually build out its private equity, real assets and absolute return programs over the coming years.